It’s always fun to volunteer to do something that a) helps a worthy cause and b) means you might learn something which could be handy later on when, if you are a writer, you find yourself needing to have a character in your latest novel do something unusual such as, for example, build themselves temporary shelter in the style of Central Asian nomads from 600 BC (Before Cottages).

I went to Denmark Farm (check out their website at http://www.denmarkfarm.org.uk/) to help erect the frame for their yurt (the canvas will be put over later, something I hope to be able to help with too). The pieces don’t look like they quite belong together – a pile of long sticks, slightly curved at one end, some trellis that appears to have come from a garden centre, and a wheel-like contraption that looks as if it is either a work of art or possibly an unskinned bodhran. The chimney (it turns out) isn’t needed until the canvas has been fitted – I was being overzealous as I helped retrieve all the bits from their winter store. 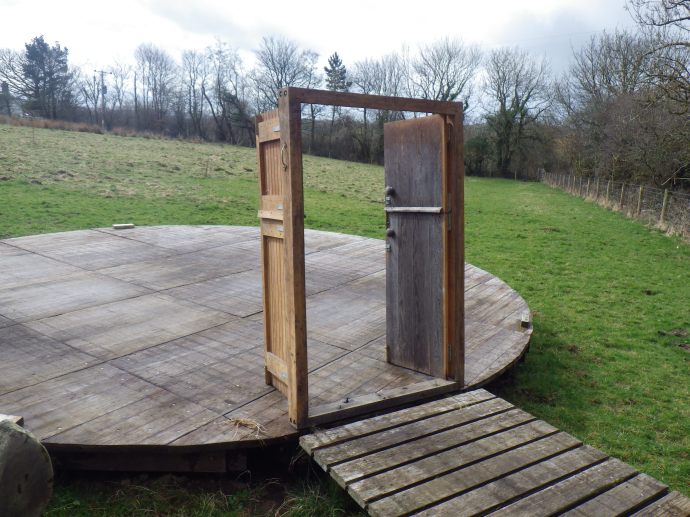 The door on which everything hinges…

First off, you place the door. Well, the doors, in a very solid door frame. This will act as an anchor point for the trellis, which you don’t grow honeysuckle up (unless you really want to, I suppose) but forms the curved walls. Unlike the nomads’ version, this yurt doesn’t move year to year, so there is a nice base with handy holes already drilled.

This trellis has a black belt…

Because this yurt has been put up and taken down a few times, the trellis is now curved a particular way. If you know which way round it goes, fitting it is a doddle. Fortunately, some bright person has marked the trellis accordingly, so putting it up with four people took no time at all.

The black band is the same stuff that seatbelts are made from and is used to tension the whole of the wall structure.

Carrying the crown into the yurt, the superstitious way

The superstition goes that it is bad luck to carry the crown (the wheel-like contraption) through the door, so it is (un)ceremoniously passed over the walls, ready for the slightly scary bit.

Wet, but not wet enough for my ‘Trellis Island’ gag

We all retired for a cup of tea at this point, partly out of a sense of dehydration but mostly because torrential rain started to fall and when I say fall, I mean, be driven into us courtesy of a howling gale. The storm passed quickly, and with tea drunk, we returned to the slightly soggy structure.

Holding up my end of the bargain – note the blue sky. Wales. March. Blue sky. It can and does happen!

Now comes the slightly scary bit, for which, ideally, four people are needed. Spaced equidistantly, three of the long, slightly bent sticks are pushed through the corresponding holes in the crown and the whole thing lifted up using a pole of some description (in this case, one of the long sticks). Once at the correct height, the three people holding the sticks tie them onto the trellis. 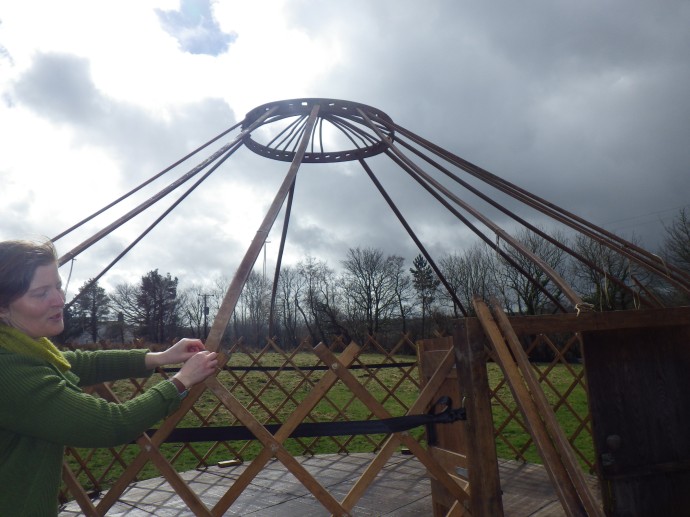 Dancing around an invisible Maypole

Then they start to fit the rest of the sticks around – at some point, the person in the middle holding the crown up becomes tired/bored/terrified that the whole thing will fall on his head and makes a run for the door. Magically (I refuse to believe physics has a part to play in this at all), everything levitates.

A thing of beauty – and essential to stop everything crashing down on my, I mean one’s, head

Ready for its canvas

And there it is… four people and about an hour and a half and the frame is up and ready to take the canvas. Watch this space for pictures of that! (Blatant advert: Better still, book a holiday in it!)

Yurt in the Landscape

6 thoughts on “Everybody Yurts”