First off, I hope you all have a good 2020, and much ScrapHappiness!

A friend of mine is doing up a house, by which I mean he has been living in a building site for two years because doing a full-time job and renovating an old property are two largely incompatible tasks. As part of this, he bought himself a mirror to go in his bathroom, when he has actually put in the important stuff like a bath, or a wall. This mirror was a really fancy one, with LED lights around the frame and a de-mister heating pad on the glass itself.

As you can see, the first delivery was not as successful as it might have been. The company my friend bought it from did replace it and instructed him to bin the defunct one. So I offered to take that and see if I could replace the glass, as that was the only thing broken (as far as I could tell). What I discovered was that:

With the exception of the box of electronics, every single component in this mirror had been glued, with something that appeared to turn into concrete once set.

This means that replacing the glass or, indeed, the LEDs or the heater pad, is effectively impossible! And it wasn’t as if this product was manufactured just after WWII, when the world went “yay, we’re-off-rations” crazy and the throwaway society was born. This was made about six months ago, when to deny that climate change is a real thing happening now meant you were leader of a country.

Everything stuck to everything else

Like I said, a ranty post. I managed to salvage the power supplies (for the LEDs and the heater) but couldn’t remove the LEDs, the heater pad or the polycarbonate surround because of the weld-like glue the manufacturers used. 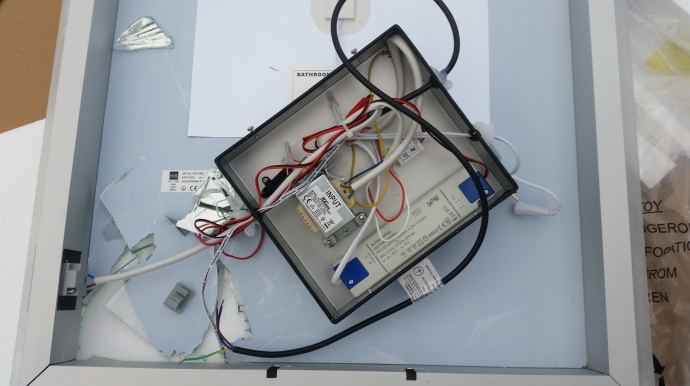 What I managed to rescue from landfill

* Angranty (adj): Part angry, part ranty as in, er, <thinks of example> “this ScrapHappy post is a bit angranty”.

These ScrapHappy posts are curated by Kate, who provides links to other (mostly sewing) ScrapHappy bloggers at Tall Tales from Chiconia on the fifteenth of every month. I have sneaked a non-fabric-based ScrapHappy in when no one was looking!