Posted on September 10, 2015 by writinghouse

I am still attacking the freshly edited first draft of Kirkenes Blue so that means time spent taking photographs of the life in the Limery – purely for inspiration and to make the alpha brainwaves start, er, waving.

The other day we had a visitor in the form of a honey bee (as opposed to a bumbling variety) and most welcome it was too. These guys are under threat from left, right and centre and yet are a hugely important part of the ecosystem that keeps us all alive (if only we would let it!).

A quick wash and brush-up

Here, the Limery’s own gigantic courgette plant provided respite for this bee from its busy day – in fact I suspect that the bee just stumbled upon it, the leaves are that big!

Is there no flying thing in the Limery that isn’t hairy??

And what is any Curcurbita without a bee? 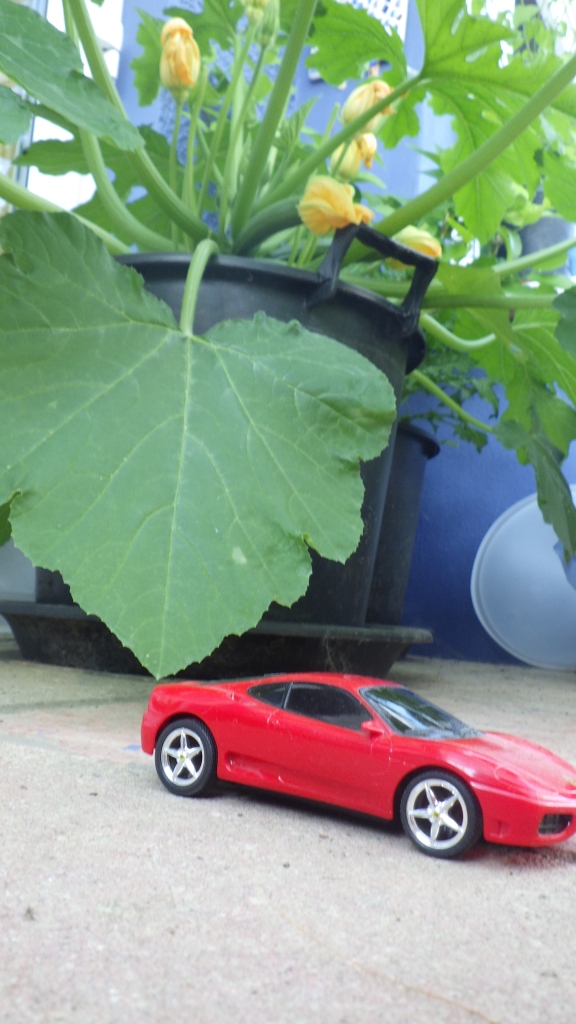 My runabout, shown next to the courgette plant for scale

Posted on September 3, 2015 by writinghouse

A Fly not living up to its name

I have started on my next novel while Kirkenes Blue is in its editing-awaiting-a-complete-rewrite phase. For this next story, I need to do lots of research which I have done by discovering the TED lectures website and the warmth of the Limery. The former ought to be Auguste’s favourite site but the lack of actual TEDs has put him off whereas it is easily my favourite already – if you’ve never heard of it, give it a go here!

The latter involves me basking in the warmth of the Limery, surrounded by plants and drawing inspiration for my novel from this idyllic surrounding. AND BY THAT I MEAN staring out the windows and photographing anything that moves, or in this case, doesn’t move.

The many carnivorous plants we now have seem to be making the flies drowsy, which is fine but I don’t think the flies are supposed to be drowsy anywhere else other than inside the plant. On the other hand, it enables me to photograph that much maligned creature, the humble house fly.

Note the iridescence of the wings and the slightly scary hairiness of the body.

A Fly still not living up to its name

I couldn’t focus any closer on the compound eyes – they look like two large eyes instead of hundreds of tiny lenses, but that is another project for another time (probably when I should be writing the next chapter of the new novel).

Now I have stopped photographing the fly, the Sundew plant at the top of the page can progress with its dinner plans!

Kirkenes – in handy mural form (the bike is real though)

What seems like a million years ago, but was probably only half a million at most, I started writing my second novel, Kirkenes Blue. As happens so often, the stuff of life that makes up life and occasionally stuffs it up came along and more than eighteen months have passed.

In a way this turned out to be a good thing, because this hiatus allowed me, through no actual planning, to revisit the Arctic town of Kirkenes in Spring to see what it looked like in full daylight. When I was last here, it was polar night so I never quite had a feel for the place.

To the Mothers of World War Two 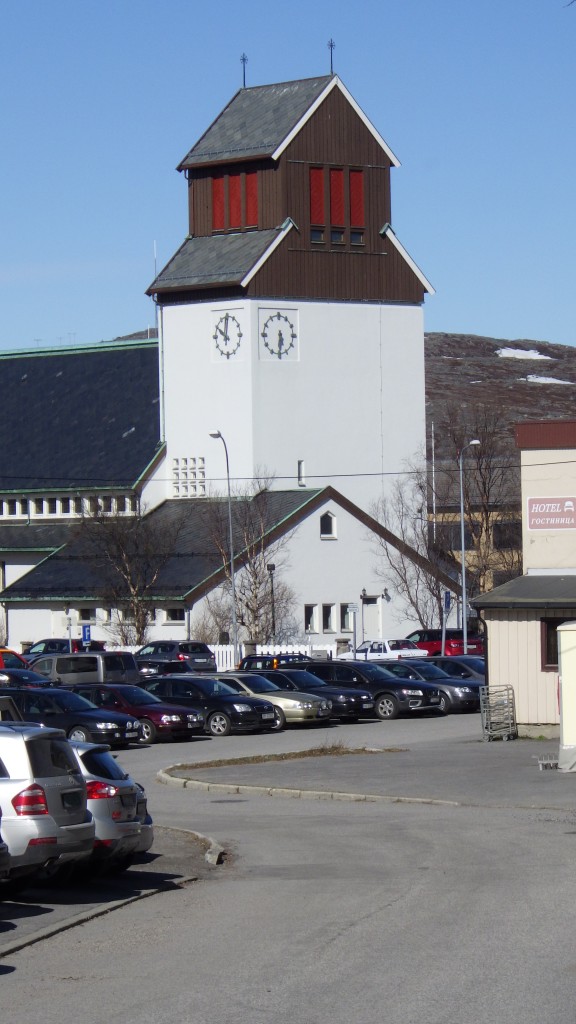 The church proving my suspicions about time in Kirkenes

Here’s an excerpt of a bit I have actually written, from the first chapter:

There are many unusual people who live in Kirkenes. Most are not born there but are carried by car, ferry, train or aircraft to a Norwegian town that nestles between Finland and Russia, on one edge of the mighty Varangerfjorden. In winter, the darkness arrives and stays, digging its heels in and resisting the sun until spring when it is kicked out and replaced by, according to some, an unwelcome light that too insists on outstaying its welcome. It is maybe because of this phenomenon that so little in the town is done by halves or half-heartedly. It is, for the most part, all or nothing in Kirkenes.

Time has no real meaning here. Given the stubbornness of the sun to stay or go most of the year, there is already a precedence by which to ignore “natural” time. The problem is that the artificial, man-measured time is also a miscreant.

If you walk westwards, you should move the clocks backwards. Except that west of Kirkenes is Finland, a country with a different time zone to that of Norway, one hour ahead in fact. So move west from Kirkenes and the clocks go forward an hour. Move east and cross the Russian border, just five miles from the centre of town, and the clocks move forward two or three hours. It is as if Kirkenes is trapped between time zone layers, like a temperature inversion but with time. A temporal inversion, if you like.

The average warmth of the local people is, however, far higher than the average warmth of the climate. The mean temperature in January is −11.5 °C and +12.6 °C in July. It once reached +16.9 °C and the first case of heat stroke was recorded in a hundred years although it later turned out that, in fact, the patient was suffering from a combination of insufficient fluid intake and more than sufficient stupidity rather than the effects of sun in isolation.

Unless you are born with the Arctic Circle gene, how you react to the cycle of cold and the dark followed by not-so-cold and ridiculously light is unpredictable. Many who come to stay, don’t. Every now and again, there are those who stay who really shouldn’t.

I find trying to pick up the story after such a break challenging. For one thing, I have had to read everything I have written from start to finish, in order to remind myself of details that I may have either not remembered or, worse still, remembered completely wrongly. Then, the next task is to fit in new material and that is tricky without disturbing the cadence of the existing writing. My next novel, I am just going to write from beginning to end without stopping, honest!*

I’m aiming to complete the writing by the end of this month and publish October-time. That’s if life lets me!

Do you want ice with that drink?

The Snail, Auguste and I are on a boat, heading for the North Pole. We will, of course, turn and miss by a few hundred miles but it still has that feeling of adventure, of entering into the unknown, the exact unknown we went to two and a half years ago (but not Auguste, his passport wasn’t ready for that trip). Then, it was polar night, the sun was shy to shine and it was the type of cold that makes your bones snuggle down under your skin, trying to remember the feel of warmer climes.

Now it is spring and the sun is like that guest at a party that, whilst great to have there, insists on staying until every other guest has left, drinks the last of the decent whisky and then demands breakfast, before deciding to move in for 6 months*.

Actually, we are going to Kirkenes, somewhere I hope we don’t miss by a hundred miles, or even one. We won’t, unlike the sun, stay there long but it gives me a chance to check out the feel of the place again as I try to finish Kirkenes Blue. The novel was supposed to be done and dusted by now; indeed Auguste was going to be leaving a copy of that in the library of the MS Trollfjord instead of BATDIG as he is going to do very soon – he just has to finish reading it first. 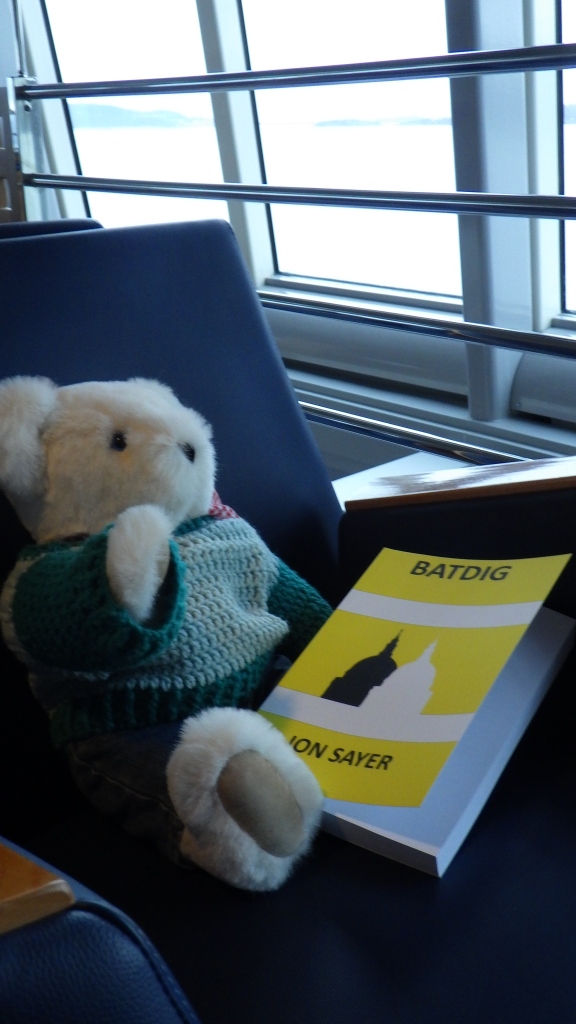 Now for a good book…oh, this’ll do…

Although it is becoming colder as we head further North, the days are becoming longer which means that, by the time we reach Kirkenes, there will be about 22 hours of usable daylight every day. Already, the sun isn’t really setting as such, just going through the motions. 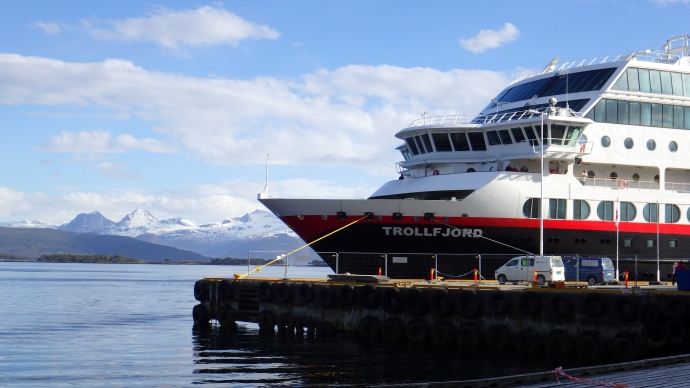 So, the three of us slowly head towards the point where we turn around and head south again, with the sun slowly realising there are no more twiglets to be had, no more rum to be punched.

**Except possibly when you’re trying to upload a blog post from the middle of a fjord via a damp piece of string.

Well, at least the cover’s sorted!

February has been and gone, and somehow, it didn’t take its time over it. I guess I am not a fan of February – it seems to be a month that is dark and unforgiving, wet and recalcitrant, as if its lack of days gives it the right to drag you into its unwelcome soul… or it could just be that I wasn’t a happy bunny for much of it this time round. That seems more likely.

Actually, I did mean to write a post during February but time just went on its way and I became bogged down in the rubbish that is work, eventually having to resort to drugs (24 pence-worth of Paracetamol) to function. I was stressed and that lowered my immune system that then allowed some bug some house-room that lowered my immune system and so on. The circle of microscopic-life.

But I don’t feel bad about this really. I am better now and I have given a gallic-type shrug to the problems at work and returned to the blogging keyboard. My “problems” don’t qualify to be called that, by any measure.

One thing I want to catch up on in March is my blog reading – I have neglected this recently and it is to my detriment. I do find WordPress hard to use when it comes to finding blogs about specific subjects, or indeed specific blogs, though.

The other thing I want to, nay MUST do, is finish Kirkenes Blue. An unfinished draft has been sat quietly on the hard drive for months now, awaiting endings and additional middle bits. My vast* experience of novel-writing and the publishing world tells me that just having the picture for the front cover is not, on its own, a guarantee of success, although we live in a world where Morrissey’s dull lifeless musings are published as a Penguin Classic, so maybe I am wrong.

I hope March finds you all ready to leap into the lightness of spring (or fall into the fruitful arms of autumn if you are on that side of the World) – another glass of Sauvignon and I’m set!